Resisting pressure for public worship services, we went on holiday.

Resisting pressure for public worship services, we went on holiday. 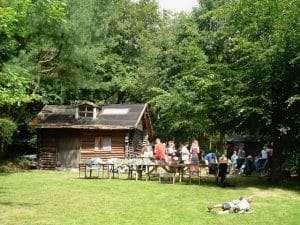 As friends invited friends, CFS grew quickly and organically with new new groups starting in homes across the area.

With the growing size of CFS in 2008, we found starting new groups had many strengths: it would help new groups of people get involved in new places; and it helped us avoid an over-emphasis on larger meetings and services where most of the community would be passive attenders.

So, we resisted becoming a single big group of consumers though some longer-haul Christians would have liked that! And we stayed a network of groups, meeting in homes.

But of course those in the network did want to meet together, so we had special days and went on holidays, forming bonds between the groups.

Where did we holiday?

We went to places as far afield as Glasgow and Holland to join in with marginalised church communities there; we took many groups of the homeless camping in Sussex; and each Summer a group of us visited Mersea Island to camp, explore faith and take part in a myriad of outward-bound activities.

We’ve lost count of the number of holidays and trips. Seventy? Eighty? More?

For many, these trips were their first holiday and time out of Southend in years.  We shared the costs, funding passports and ensured that those without cars (the great majority) were not left behind.  Camping and rough camping were ways to make it accessible and affordable to all. And people paid what they could.

The trips almost invariably went well. Again and again, friends and acquaintances of those in CFS would come, giving them opportunity to see faith in action and the  community grew further.

Holidays had become a replacement for church services, and gathering around the campfire an alternative for sitting in rows.

Page load link
Let us know you agree to us using cookies to give you the best experience or visit cookie settings to provide a controlled consent.
Cookie SettingsYes, I agree
Manage consent